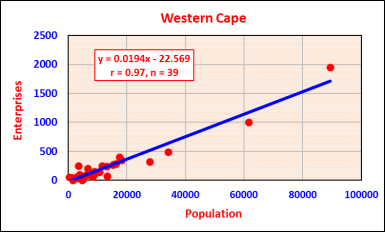 Orderliness in enterprise development in South African towns has been observed as statistically significant correlations between different characteristics of South African towns. One of the first correlations noted was a statistically significant positive relationship between the population of South African towns and the number of their enterprises. This was observed in the Free State, the Northern Cape, the Western Cape (see graph) and the Gouritz Cluster Biosphere Reserve. In fact, towns in the Eastern Cape Karoo exhibited such relationships over a period of a century. One can conclude the relationship is ubiquitous in South Africa.Is it surprising that there is such a relationship? Hardly. It is logical to expect that a larger town is likely to have more people and enterprises than a smaller town. However, what is surprising is the fact that the predictive capabilities of demographic-entrepreneurial relationships and their implications for economic development, job creation and poverty alleviation hardly figure in national, regional or local development plans.

Daniel Kahneman, the only non-economist to have won a Nobel Prize in Economy, reminded us in his book, Thinking, Fast and Slow, that simple algorithms often predict more effectively than experts. Martin Ford in The Rise of the Robots: Technology and the Threat of Mass Unemployment, said: “In many cases, however, and especially in the realm of business where the ultimate measure of success is profitability and efficiency rather than deep understanding, correlation alone can have extraordinary value.”

Statistically significant correlations imply useful regression equations, and thus predictive capabilities. Pontification about the regeneration of small towns without consideration of how such towns can attract more people to ‘carry’ more enterprises, which can provide more employment, seems to be an exercise in futility.

‘Strategies of hope’ are replaceable.

View all posts by daantoerien