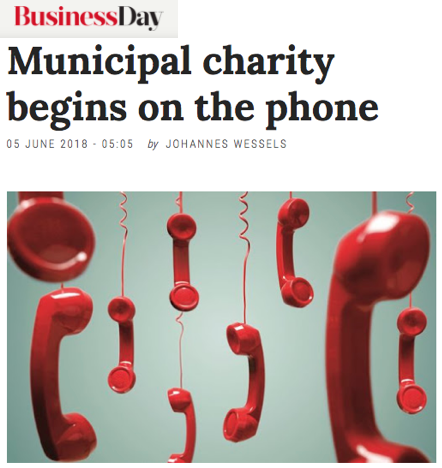 Mkhize immediately stressed the fact that a large percentage of audits were unqualified: “this represent a solid base for national and provincial government’s support programs to improve financial management in municipalities”. Nel in an interview on RSG said tremendous progress was made from 2012 to 2016 and that should be kept in mind. The AG report reflects the situation after new councils took over in 2016.

Mkhize is correct that unqualified audits cannot be equated to corruption or fraud. However, it remains unauthorised with record levels of “material non-compliance” and no adherence to AG recommendations to improve financial management. And Nel actually acknowledged that systemically no progress was made to institutionalise good financial governance.

Picking out the positive, however, is typical Allister Coetzee.

The outcome of the AG report was no surprise. EOSA had 32 municipalities tested to assess how long it took them to answer their phones. A survey institution was contracted to call 17 municipalities in the Free State and 15 in KZN on Tuesday and Thursday mornings between 09:30 and 11:00. The time for the phone ringing was to be recorded. In the case of automated answering, the time recording commenced after executing option 1 which in most cases was the extension for the municipal manager’s or mayoral office. If there was no answer after holding for 250 seconds (4 and a half minutes), the call was ended. Each municipality was called three times and the average recorded. 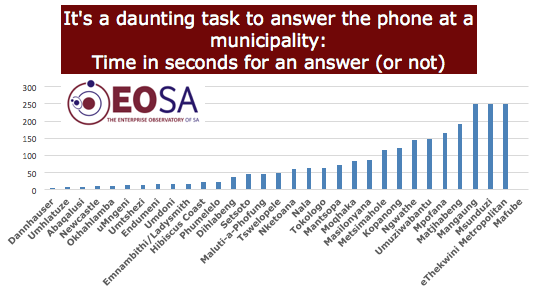 It is clearly better to call a municipality like Mafube where the Telkom service was suspended, than phoning a metro. In the case of Mafube one doesn’t waste time or hope: there was immediately a robot voice informing one that the service was suspended, but in the case of the metro’s callers hang in in vain, hoping that there will be some intelligent response that will end that ringing…

As John Cleese said (in his award-winning performance as Brian Stimpson in Clockwise): “It’s not the despair, Laura. I can take the despair. It’s the hope I can’t stand.” 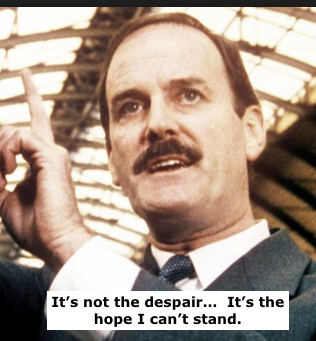 Answering the phone appears to be an extremely problematic and challenging task at local municipal level. One can therefore imagine how life-threatening compliance with financial laws and regulations could be.

Maybe the death threats to AG personnel in Ethekwini could in this context be construed as a mere case of self-defence?

PS 1:  Municipalities are (also) tasked with local economic development (LED). One of the key strategies (according to the National Framework for LED) is “improving good governance, service delivery and public and private market confidence in municipalities.” The AG’s report torpedoes any pretence of progress or achievement.  The slow or non-answering of phones prove the municipalities are not accessible.

PS 2:  Allister Coetzee has all the soundbites to become the next Minister of CoGTA. He had perfected the approach to find victories in the greatest defeats.  He would surely find hope in the three municipalities that answered in less than 10 seconds.

PS 3: The sad thing about a clean audit, is that it only tells one that the money was spent in accordance with regulations, it is no indication whether the money has been spent wisely or on irrelevant side shows.