The incapacity of Government to fulfil its basic task to effectively protect the rights and property of all persons (natural and juridical) thereby ruining economic growth, is matched by its dedicated neglect of scarce natural resources. In a water-scarce country like South Africa this amounts to much more than an ecological disaster: it borders on economic suicide.

Like people, no single enterprise can thrive without access to reliable water. The situation in South Africa remains far better than in most African countries. However, not every middle-income country can boast its Government has systematically:

The actions and inertia of municipalities are not only a driving force fuelling unrest, protest and vandalism, it also undermines investment and thereby growth and poverty alleviation and threatens some of the most lucrative exports from South Africa: fresh fruit & vegetables as well as processed fruit and vegetable products may be banned from especially EU markets.

Inge Kotze, senior manager for Sustainable Agriculture at the WWF points out: “Wine and fruit exporters have to comply with stringent international food safety certifications, such as GAP, Tesco Nurture and LEAF, all of which include strictly monitored food health and safety, social and environmental regulations. If these certifiers carry out tests in an area and find E coli in the water because sewerage is not properly managed or because raw sewage is flowing into the rivers, it directly threatens the export market. At the same time, it threatens the health of the people living in this region and it threatens the sustainability of the water supply.”

Within South Africa some of the large distributors of fresh horticultural produce have put a stop to procuring certain products from farms irrigated with water from the Hartebeespoort Dam. Turton says: “Outlets like Woolies are becoming concerned and no longer source leafy greens from places irrigated out of Harties. The issue is the transmission of Microcystin LR, with the toxic element BMAA.”

Whilst pollution through mining and industrial activity was severe in the old South Africa, the radical transformation of the Vaal River into the South African Cloaca Maxima by discharging raw sewage adds momentum to the situation.

Rivers severely affected by raw and poorly treated sewage include the Crocodile, Vaal, Klip, Hennops and Jukskei Rivers in Gauteng, the Vaal and the Harts in the Northwest Province, the Dusi and both the upper and lower Tugela in KZN, the Mthatha and the Fish Rivers in the Eastern Cape. Raw sewage from Deneysville flows into the Vaal Dam and Senekal’s untreated sewage spills into Allemanskraaldam. 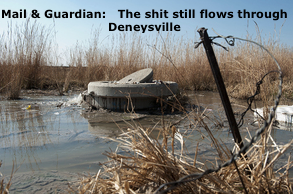 In some rivers, the problems are aggravated due to upstream extractions (for urban and irrigation usages) resulting in decreased flows. Simultaneously, the addition of nutrient-enriched sewage often exceeds the flows caused by rainfall. The result is, in addition to an ecological disaster:

DWS (earlier the Department of Water Affairs) is tasked to ensure the provision of bulk water. That can only be achieved by ensuring the integrity of South Africa’s rivers and timeously ensure sufficient storage and/or transfer capacities. DWS is damaging the economy on two fronts: 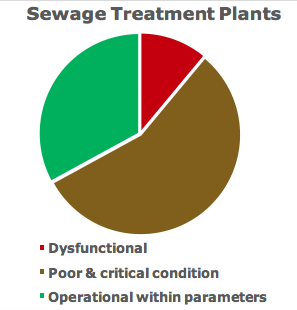 DWS is also responsible to monitor the quality of treated waste water before releasing these into the rivers. It is in this context that the Blue Drop and Green Drop Reports are crucial. For more than 4 years after 2012 the updated reports were not released. Only in January 2017 the 2014 reports were released that recorded a 55% decline in the number of water supply systems receiving Blue Drop status. Despite that, Deputy Director General Anil Singh said there was no reason for concern or alarm: “The drinking water we have in South Africa is amongst the best in the world.”

With the deterioration of river content, the purification to acceptable levels of potable water becomes increasingly problematic both technically and financially. Based on what DWS acknowledges in their draft Master Plan, it is clear Brown Drop status would be more accurate than Green Drop-status.

The cadres deployed by Government in DWS (those supposedly monitoring the quality of discharges) and at the 1150 municipal sewer treatment works seem to be both colour-blind and having anosmia… They could neither detect the filthy colour of what they released, nor could they smell the stench. There is also no realisation that these actions undermine export-led growth initiatives.

Water expert Anthony Turton warns the DWS has compromised South Africa’s future by neglecting its oversight role, resulting in Government being the largest polluter of water. “South Africa has polluted its natural water resource to such an extent that it now faces a crisis of induced scarcity.”

This is another classic example of a national department failing its primary Kindergarten function with disastrous impact not only on public sector finances, but on the real economy: harming both producers and becoming an export risk. There is little if any awareness that the economy is like a woven tapestry:  plucking a loose fibre at one end kan distort the intricate woven scene elsewhere and even lead to the unravelling of the tapestry in its entirety. DWS succeeded in putting the drol in hy-drol-ogy at a massive environmental and economic cost.

It is unlikely that either the DWS (having lost the vast majority of its engineers replacing them with technicians that are referred to as engineers) or dysfunctional local authorities will be able to perform to the required norms of water quality.

A way to turn matters around would be for DWS (and Treasury) to make franchises available for the running of both water purification plants as well as waste water treatment plants. DWS will obtain better value for money than from subsidising local authorities that would rather spend on entertainment and travel allowances than on chemicals for waste treatment works or maintenance of such operations.  With a reward system franchise holders can earn income according to volumes handled that comply with health and safety standards and indicators.

This approach may upset the stomachs of the praise singers of state-led development and state-fingers-in-every-pie.  However, adhering to the belief that the state at DWS and municipal levels have the capacity and integrity to turn matters around to achieve sewage treatment plants operating to acceptable norms, is akin to relying on a rain-dancer to supply in the growing water demand of the Gauteng industrial complex.

PS 1: When releasing the 2014 reports, DWS had pledged to complete its 2016 reports by October 2017. These are, however, still outstanding.

PS 2: In May, Gugile Nkwinti, Minister of DWS, said he knew who in the department were responsible for the “mess” and the R6.7 billion irregular expenditure.  However, he would not expose them and rather give them a “second chance”.  The question is whether Nkwinti can ignore his constitutional duty to expose such maladministration known to him (he has not laid a single charge as yet) without becoming an accomplice after the fact?

PS 3:  Flushing away is not sustainable:   remove one local authority function from the realm of public incompetence to the realm of individual responsibility.