Government’s ad hoc stimulus package aims at infrastructure investment to promote growth.  It is totally silent on high crime levels that is one of the major causes of divestment with SA deteriorating into a combination of the Wild West and a Mafia state.

South Africa’s shocking crime statistics were paraded on social media and media talk shops as being mainly caused by poverty.  Economic growth can therefore be considered as essential to get poverty down. Then crime levels would also decline…

The statistics on crimes against business indicate that there are a range of criminals at work: the survivalist type (e.g. those who shoplift a piece of frozen chicken, those who need a sheep for the month and those who cash in on others in transit).  Almost resembling the range from informal traders, struggling SMEs to the few big corporates.

With several commentators finding the root cause for crime in poverty and the root cause for poverty in apartheid, I was reminded of a sociologist I had encountered during the township turmoil in the mid 80s.  She had a class interpretation for the violence including the abominations of:

The sociologist even had a class interpretation of Genesis: Paradise was not about God, Adam and Eve, but about the rich and the poor. Poverty drove Eve to appropriate the apple: the poor woman did not even possess clothes and was not even aware of the level of her poverty…

This line of reasoning has its roots in the period 1830 – 1860 when societal statistics revealed regularities in more than births, deaths, height and weight.  The discovery of regularities in “willful acts” like robberies and even murders (expressed as, say, the number of incidents per 1000 of the population) prompted statistician Adolphe Quetelet to take such acts out of the realm of individual responsibility and placing them in a category of societal necessity. For him, statistics revealed criminal patterns as characteristic of society and therefore a societal determinism caused these acts.  The culprits were thus statistically exonerated. Society was the real culprit.

None of the recent commentators that considered poverty in South Africa as the root cause for the high criminality, paid any attention to really poor countries with far lower crime rates. Tanzanians are significantly poorer with a per capita GDP less than 20% of the South African per capita GDP, but on the WEF’s Global Competitiveness Index Tanzania ranks significantly better than (36 positions) than South Africa concerning the cost of crime. There are numerous other examples, including Sri Lanka that, like South Africa, suffers from a violent past.

Do I hear the argument changing from poverty to the rich being the culprit? If they were not so rich and no wealth gap existed, there would be no incentive to pilfer…

Anine Kriegler of the University of Cape Town, responding to the shockingly high crime statistics, argues that Beki Cele’s call for more police isn’t the answer since “a number of studies on the relationship between policing levels and crime rates suggested that the impact of more police is generally small.”  The abstract of the paper she relies on, says: “Twenty-four studies met the criteria for systematic review; 12 met the criteria for meta-analysis. Findings from a vote-counting procedure reveal mixed evidence of policing’s effect on crime; however, results from the meta-analysis suggest  there is a small, inverse association between police levels and crime at the macro-level.”

That is not exactly the same as suggesting “the impact of more police is generally small.”

Kriegler argues that leaders must address inequality: “South Africa is a highly unequal society (and) has one of the highest Gini-coefficients in the world. Research shows that inequality and crime go hand in hand.” She then quotes as source a paper in the April 2002 edition of Journal of Law and Economics Vol XLV by Pablo Fajnzylber and Daniel Lederman titled Inequality and Violent Crime.

She doesn’t mention that Fajnzylber and Lederman themselves thought their paper had serious shortcomings: “we have not provided a way to test or distinguish between various theories on the incidence of crime” and “a more nuanced econometric exercise than what we offer is required to shed light on the relative validity of various theories on the inequality-crime link.” Another shortcoming is then stated: “we have not identified mechanisms through which more pronounced inequality leads to more crime. Uncertainty about these mechanisms raises a variety of questions with important policy implications. For instance, should police and justice protection be redirected to the poorest segments of society?”

Data shows no definite correlation between inequality and crime

Contrary to what Kriegler suggests, a recent World Bank funded study on the Socio-economic determinants of crime in South Africa came to the conclusion: “We did not detect any relationship between inequality and violent crime, nor between unemployment and any crime type.”

( I encountered one opinion piece on the high crime rate that did question the notion that poverty was the leading cause for high criminality. That by Johan Fourie asking why criminality was higher in the richer provinces of Gauteng and the Western Cape than in the poorer Limpopo? )

GINI and Cost of crime to business (WEF)

EOSA therefore tested at a global level the correlation between the Gini coefficient and criminality.  For the latter, we used the WEF’s indicator of the cost of crime for business (Figure below).

The two countries with the highest GINI coefficient (Lesotho at 0.632 and South Africa at 0.625) experience radically differences in the cost of crime.  In addition, the hail-gun shot distribution around the regression line confirms there is no correlation, contrary to the arguments that there is such a correlation.

Whilst correlations do not prove causality, the following are essential to understand criminality in South Africa.

This correlation between inefficient policing and a high cost of crime for business is so significant, that one can confidently predict that when policing would gain in efficiency, crimes against business would decrease and vice versa.   Likewise, an increase in crimes against business can be taken as an indicator that there has been slippage in efficiency in the police service. 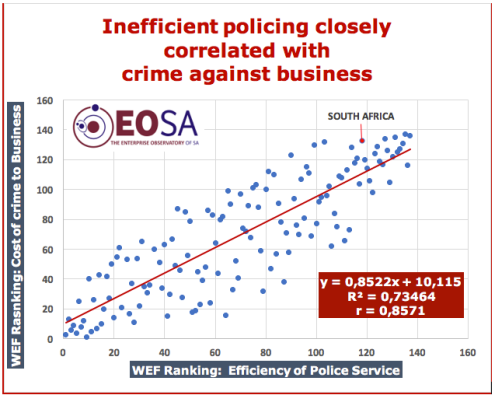 Correlating the WEF’s Cost of crime for business with the Fraser Institute’s Economic Freedom rankings, a very significant correlation emerges with businesses in “most free economies” having the lowest cost of crime.   South Africa, however, is sliding down the slope closer to the cliff edge from where Venezuela has dropped into the abyss.

Whilst acknowledging that poverty and structural unemployment portray complex characteristics, without economic growth these systemic symptoms cannot be addressed.  As C Northcote Parkinson remarked: “Aim at prosperity and employment will follow.  Aim at employment and you will get anything but prosperity.”

A stimulus package that would really get the economy growing should entail:

The strategy should commence with a reformed police service where remuneration, bonuses and promotion will be linked to independent assessments and performance-monitoring of (i) crime prevention, (ii) success rates with detective work and (iii) effective prosecution. It should be introduced wall-to-wall in a single province with wall-to-wall newly defined job descriptions and individual performance targets. Involved in this decentralised monitoring mechanism should be the provincial government, local governments as well as the private sector and civil society (e.g.  Accountability Now, the Institute for Security Studies,  churches) with the police bound to report regularly in writing and with presentations.

More efficient policing is not the be all and end all to get crime levels down to tolerable levels:  economic growth and efficient service delivery and the nurturing of a modern societal ethos and accountability have their role as well.

However, sufficient investment and economic growth cannot kick in at the current extraordinary high and debilitating cost of crime.  Lower crime levels have to be ensured. That will require accountable and efficient policing.  If the current government cannot perform this Kindergarten task of governing, the exodus of productive knowledge will accelerate.