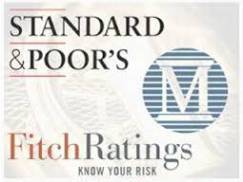 With Moody’s soon to announce their assessment of SA’s credit risk, Finance Minister Malusi Gigaba made it clear that a white minority was controlling the economy through a monopoly and that was now to change.  Gigaba, speaking mostly in isiZulu, said “The economy is controlled by a minority; they are a monopoly. There are a lot of companies owned by very few people and the services and products on offer enrich these few people.” (Gigaba: It is time to put us first ).

Addressing an ANC Youth League event in Pinetown, Gigaba remarked that there was an agreement in 1993 that white people would continue to have a say in the economy.  The ANC stayed committed to this, “but now has come a time for change. It is time to put us first.”

One can assume that the Minister believes this speech will help to convince Moody’s that he is serious about economic growth, stability and policy certainty and that they should not join the other rating agencies by downgrading SA to junk status.

A monopolistic situation manifests where an enterprise dominates the rest of the market to such an extent that it can call the shots:  like the old Dutch East Indian Company on spices and from the 1990s to around 2010 Microsoft with Windows.  De Beers clearly possesses a monopolistic domination in diamonds.

The question is which other sectors Gigaba can point out as being dominated by a monopoly?  It cannot be banking, since that sector has at least five sizeable actors with fierce competition for market share.  In addition, it is difficult to determine the “race” of banks.  With shareholders (who are the owners) coming from all population segments, substantial foreign shareholding, as well as institutional shareholding on behalf of the PIC which states on their website that they own one-eighth of the equity value on the JSE  (The PIC with the Government Employees Pension Fund owns 12.5% of JSE equity)

It cannot be farming, since farming characterised by predominantly small and medium enterprises (family firms). In manufacturing there are several international vehicle firms (VW, Toyota, Nissan, Ford, and Daimler) with the first announcement of divestment last week from General Motors. Sasol is a petro-chemical giant, but no monopoly since big international oil companies are also operating here with their own refineries.

Tourism & hospitality is by and large SME terrain with a few exceptions.  Trading victuals is a terrain of fierce competition between giants like Shoprite, Pick & Pay, Woolworths, Spar the newcomer from Botswana (Choppies).  It is a competitive terrain with substantial institutional shareholding in the large traders.

Gigaba’s remark that only a few people are being enriched by “a lot of companies owned by a few people” is at best demonstrating a lack of grasp about the ownership structure of listed companies and how several hundred thousand direct and indirect shareholders are enriched by dividends and share price growth of successful firms. If not ignorance, he is stirring opinion against listed companies, entities which he needs to persuade to invest more and more in order to stimulate growth that is required if SA wants to regain credit rating.

Probably Gigaba is more concerned about racial quotas than about monopolies:  he hasn’t uttered a word about the devastating effect of State-owned Enterprises (SOEs) The Portnet monopoly on harbours results in tariffs of  276% of the international benchmark and ship turn-around times are way above the international norm.  This monopoly ensures SA exporters to be less competitive. Simultaneously, SA consumers of imported products have to cough up much more than would be the case were there proper competition at port level. 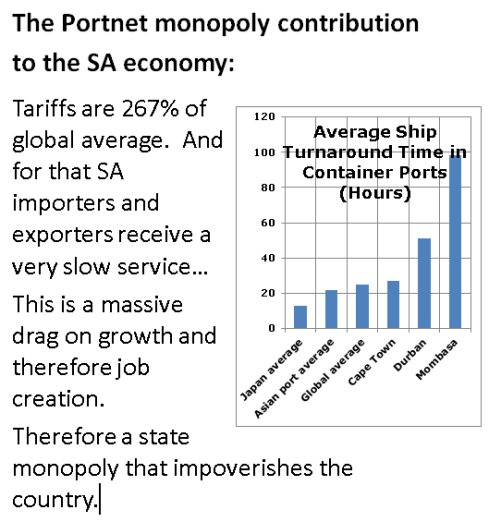 There was not a word about the near monopoly situation of a mismanaged SAA, an Eskom that through poor planning and maintenance had torpedoed several investments in South Africa (e.g. an aluminium smelter in Port Elizabeth) and that threatened independent power producers that it would not buy energy from them. (Eskom as producer, distributor, wholesaler and even retailer of electricity is inefficient because of poor governance and management as well as massive institutional conflicts of interest).

These are true monopolies, and they are neither white-owned nor black-owned, since an enterprise has no race.  But these monopolies are all state-owned.

Gigaba, if serious about improving competition to stimulate efficiencies and growth, can commence by dismantling SOE monopolies in these fields. The World Bank as well as the IMF have called repeatedly on the SA government to dismantle these monopolies that are barriers to economic growth and thus employment creation. That, more than his speech at the ANC Youth League, might convince Moody’s not to slam junk status on SA as well….

See also: State-owned Enterprises: the Python in the Garden of Eden.

4 thoughts on “If monopolies are the problem, start dismantling the worst: the State-owned Enterprises”