Whilst the downgrading of investor status by Standard & Poor and Fitch already drives foreign investment away from South Africa with capital flight from the JSE, at the local front ineffective crime prevention by the Government is one of the largest disincentives for enterprise investment:  a million people would have considered home-based businesses were it not for criminality.

The failure of the state’s capacity to provide adequate protection to its citizens as well as institutions, is evident in the growing percentage of South Africans shying away from pursuing home-based business opportunities. From 2010 to 2015 the percentage of persons refraining from establishing businesses from their homes because of crime has increased from 8.2% to 11.8%.  This is evident when comparing Stats SA’s Victims of Crime reports for these two years.

When looking at the percentages one can easily dismiss it as insignificant:  but it is not a 3.6% increase, it represents an increase of 44% of persons shirking home-based businesses because of high levels of criminality.  Whilst it is common sense that not all enterprises that would be started (were it not for high crime levels) would have been successful, one can on a few base assumptions calculate the disinvestment caused by poor governance on entrepreneurial activity and the employment landscape.

Take the 6.214 million unemployed South Africans and add the 2.277 million South Africans who are already so discouraged that they not longer look actively for employment:  a total of 8 491 000.  With this figure in mind one can estimate the impact on unemployment as well as the social grant burden on the state by the following parameters:

The racial groups scared off 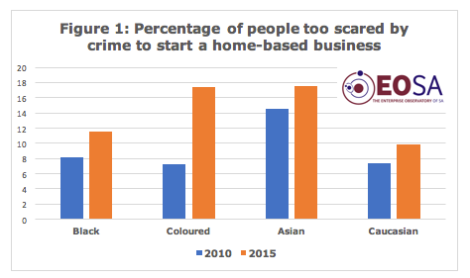 most by Government’s inability to protect them, are Coloured and Indian, followed by Blacks. Economic empowerment and an increased enterprise participation rate by blacks can be promoted by Government doing one of the most basic Kindergarten tasks of governance properly: protecting people and their assets.